Regardless of whether or not we like to admit it, we humans are creatures of comfort. After all, we build nice, cozy, houses to keep us warm in the winter, cool in the summer, and dry when it rains.

We like to sleep on nice, comfortable mattresses or sleeping bags. We also have pantries, refrigerators, ranges, and microwaves in our kitchens so that our favorite foods are readily available any time we want them.

We bring sleeping bags, camping stoves and large family tents on our hunting or outdoor trips to keep ourselves in the highest levels of comfort.

Whitetail deer have no such luxuries. Instead, they live outdoors where it’s hot in the summer, cold in the winter, and wet when it rains.

Also, unlike we humans, deer have neither pantries nor refrigerators, so they have to eat what is available in their area at any given time of year.

Deer are accustomed to a degree of hardship that most humans avoid like they do with a stranger that wants to borrow money!

All of this translates means that deer hunting is not only viable in bad weather conditions, but sometimes even preferable depending on the area.

Do Whitetail Deer Move in the Rain and Wind?

Whitetail deer are also far better adapted to a life outdoors than humans are.

Deer not only have metabolisms that enable them to withstand cold temperatures that would freeze most humans to death, they also have their own reliable coats.

Whereas, we humans have to appropriate ours from other animals or make them from synthetic fibers.

Because humans tend to studiously avoid hunting in bad weather, we are amazingly adept at convincing ourselves that whitetail deer feel the same way that we do about it!

But deer live outdoors twenty-four hours a day, seven days a week and have warm, waterproof, fur coats, as well as a daily need to feed themselves.  The fact is that they have far less aversion to traveling and feeding in bad than we humans do.

Many experienced hunters have also observed that deer seem to have some innate sixth sense that warns them when a storm is approaching about as far ahead as our modern weather forecasters can predict.

Therefore, they do tend to feed more actively during the couple of days prior to the storm’s arrival. They need to play safe in case the weather does turn out to be severe enough that it prevents them from moving beyond their bedding areas.

When hunting deer, you have to keep in mind that adverse weather will impact your hunting tactics more if you are compound bow hunting versus if you are hunting with a 308 or a 30-06.

Hunting binoculars will come in handy as will rangefinders to ensure that you are measuring the most accurate distances while taking wind into calculation of your shooting trajectories.

Now, let’s look at how deer move around during adverse weather conditions. 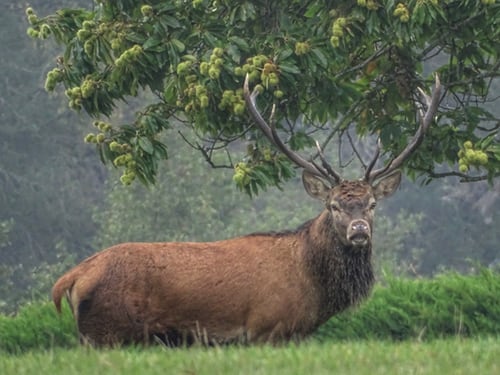 Deer seldom seem to mind a light breeze that simply rustles the tips of ground level foliage a bit.

They do tend to avoid moving during periods of high winds because this type of wind makes it very difficult to detect and identify predators. High winds, shreds predator’s scent and makes it difficult for deer to determine which direction peril is coming from.

High winds make it very difficult for them to hear a predator approaching over the rustling of the brush too. All of the moving foliage might also hide a sneaky predator’s movement.

On the days with light wind and, especially when the wind is steady from a single direction rather than swirling first from one direction and then another, deer tend to move and feed very actively.

They are not only able to use the steady breeze to approach their favored food sources from downwind while detecting any predators waiting in ambush. The slight rustling of the bushes helps to cover the sound of their steps as they travel; thus increasing their level of stealth.

Keep in mind that if you are bowhunting, you absolutely must make the right judgment call on accounting for the wind in your aiming trajectories. Not doing so will likely cost you a clean kill.

In windy conditions, a lethal, razor sharp broadhead could greatly increase your bow’s accuracy and your chances of an ethical harvest.

Just check out our freshly updated list of the best broadheads for hunting. We have rabidly popular options for deer hunting too. 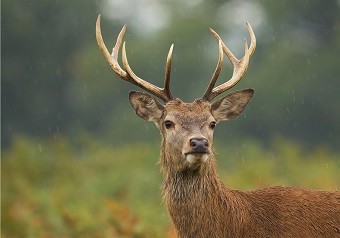 The same can be said for light rains versus torrential downpours. In fact, during periods of heavy rain, deer also have difficulty smelling, seeing, or hearing predators approach.

As a result, they also avoid moving during heavy downpours until the rain either slackens or stops.

Light showers, on the other hand, tend to soften the leaf litter underneath their hooves. This helps silence their movement and prevent their scent from traveling and alerting predators of their presence as well.

Rather than pass away the hours dreaming about deer hunting while remaining warm by the fire during periods of inclement weather, experienced hunters have instead learned to use bad weather to their advantage.

In fact, simply by watching your local weather report, you can actually predict when the best time to go hunting for whitetail & red deer is!

Deer have an incredible, innate, ability to sense approaching storms (probably by noting the smell of the air combined with subtle differences in barometric pressure). So, they are forewarned that the weather will soon turn.

While deer don’t seem to be bothered much by light winds and/or light rains, most of them do bed down in both heavy winds and heavy rains.

A good altimeter watch can be handy in rainy conditions as it can give you critical info on differences in air pressure as well, so you can pickup on incoming storms in the same fashion as the deer you hunt.

Deer are fully aware that minor storms are little hindrance to them but, major storms may very well force them into their beds (and starvation) for an undetermined period of time.

Below there is an excellent video HamBrosOutdoors put together on hunting out deer in the rain: 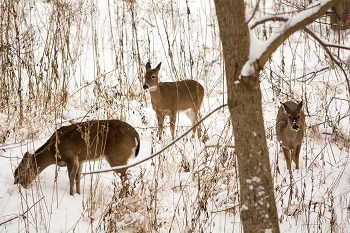 Similar to heavy rain and other hard weather conditions, deer act similarly in both light and heavy snowfall and most especially during blizzards.

This behavior has been seen and documented well on different trail and game cameras by numerous hunters.  Deer will often feed lightly prior to and after the first few snows of early winter.

Just as soon as they sense a major snowstorm arriving, they will drastically increase their feeding activities. (Here are 20 more facts about whitetail deer you probably didn’t know).

Deer can often be seen feeding throughout the day prior to a storm so that they can consume and store as much food as possible before the storm arrives and drives them to their deep woods havens.

Deer have a high metabolic rate and use up energy at a much faster rate than humans do. They have no other way to gather and store food for convenient consumption like humans do.

So when deer are forced to stay in their beds for extended periods of time by extremely harsh weather, they are often ravenously hungry when the weather conditions finally improve.

As a result, they also tend to feed heavily after the passing of a major storm.

Both prior to and after the arrival of a major storm are both excellent times to go deer hunting because the deer will be not only be feeding actively, they will also be single-mindedly focused on their task making them less wary than usual.

You could also make your life a lot easier by using a quality deer attractant to make them come to you. Check out our list: Best Deer Attractants – 10 Different Bait Options to Lure Bucks. 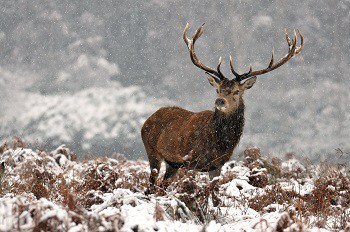 While we have so far discussed how whitetail deer react to wind, rain, and snow, we have not yet discussed their reaction to extreme cold.

The fact is that human hunters use excessively cold temperatures as an excuse not to go hunting just as often as in the wind, rain, or snow!

Deer live outdoors twenty-four hours a day, seven days a week. They also have a thick fur coat made from course, hollow, hairs combined with relatively thick skin and a thick layer of subcutaneous fat.

So, they are not bothered by the extremes in weather as we humans do with our thin skins and lack of fur. But, that is not to say that deer are altogether unaffected by cold weather.

They are more active in feeding than earlier in the year because their bodies require more calories to generate heat in cold weather.

Just like days when the wind is howling at gale force and/or the monsoon has arrived and the whole forest sounds like the Amazon Jungle in a downpour, deer then tend to stay in their bedding spots until mid or late morning.

Deer tend to hide during periods when the overnight lows dip down to single digits and below due to an arctic blast from the north, as well.

They do this in order to conserve valuable body heat and then rise and move out to feed once the Sun has been up for a while and the ambient air temperature has risen a bit.

They also tend to feed most heavily just prior to the arrival of such air masses so that they can store enough energy to allow them to be able to lounge in their beds until the air warms a bit.

Regardless of the type of weather, however, getting a clean ethical kill is a must-have for any conscience-driven hunter.

Our veteran hunters have rounded up and explained the best shot placements on deer when hunting with either a rifle or a bow: Where to Shoot a Deer – Aiming for the Best Kill Zone Placement

As you can see, while many whitetail & red deer hunters find inclement weather to be both inconvenient and uncomfortable with good reason.

But the couple days just prior to the arrival of a major storm or cold air mass as well as the first couple of days after its passing can actually provide hunters with the best possible opportunity to fill their tags for the season.

Rather than disparage bad weather, deer hunters should instead learn to embrace it since both its coming and going herald some of the best days of the year for deer hunting. 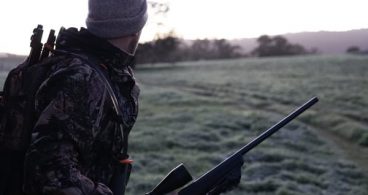 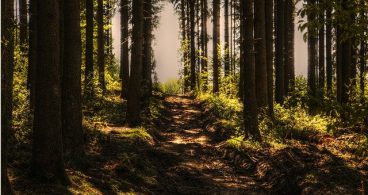 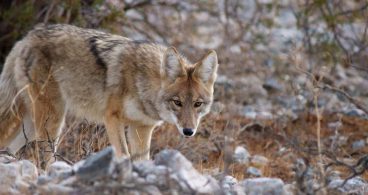 Coyote Hunting 101: Outsmart Any Yote with These Pro Tips 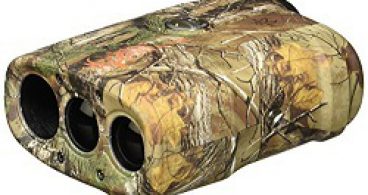 Nikon ACULON Rangefinder Review: A Gadget You Need On Your Next Hunt