Do Kayak Paddles Float? The Scoop on Your Navigation Companion’s Buoyancy

Do kayak paddles float? This is a common question among new kayakers, but there’s no ‘black or white’ answer as buoyancy largely depends on the paddle’s design and materials, which usually vary from one brand to another. 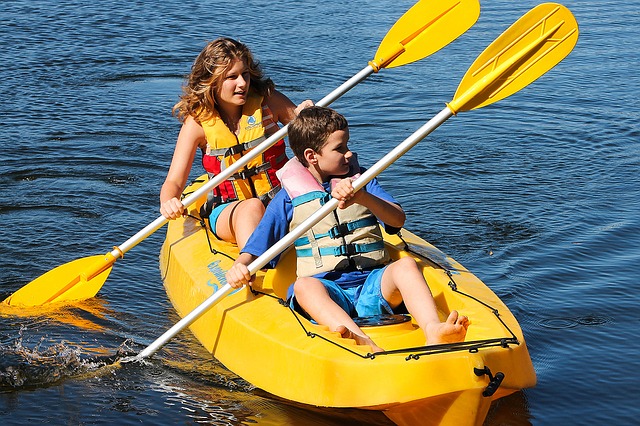 Generally, the answer is yes, but there’s no absolute answer. Paddles come in different forms and float to varying degrees, and some types may slowly sink.

Questions like “Do kayak paddles float?” were more important in the past, because paddles were more straightforward and made with basic materials that didn’t provide ideal flotation. Regardless, some paddles still float better than others, and the price is often a factor.

So, do kayak paddles float? And if so, how well? It depends, so let’s look into what makes them float.

What Affects How Well the Paddle Floats? 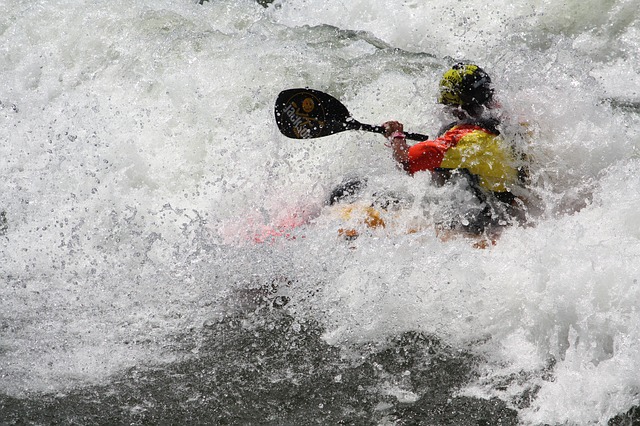 Whether you’re primarily into fishing or racing, there are specialized paddles for every case. Each type also comes in different varieties, and different manufacturers have different designs.

As you may have guessed, the weight and materials have an effect on buoyancy. But the shape and other aspects also factor in.

It stands to reason that manufacturers should ensure at least decent flotation of their paddles, and this is usually the case. Nonetheless, getting an understanding of kayak paddle design will help you determine the buoyancy of a paddle before buying it.

And, as always, skimping on essential tools often leaves you with something that doesn’t work. For example, there are paddles that sink and ones that drift away too easily. If you want to be sure, consider an unsinkable paddle. 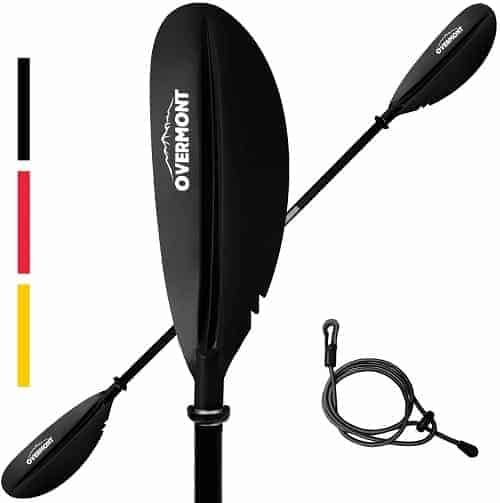 The first factor that comes to mind when thinking “do kayak paddles float” is usually the overall weight and density. After all, stones tend to sink while sticks tend to float. A budget-friendly paddle will typically weigh more than an expensive one. 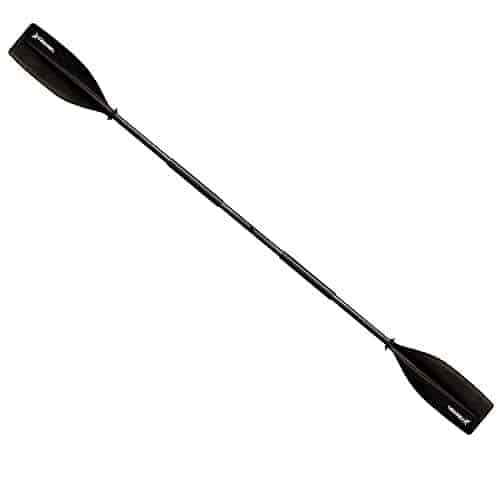 In addition to the actual weight, there’s also the factor of swing weight. This is the perceived weight of the paddle as you use it. In other words, it determines how heavy it feels to paddle. Since there are an upswing and a downswing, and there’s both gravity and water resistance to consider, swing weight doesn’t always scale with absolute weight.

How do kayak paddles float in relation to their swing weight? Well, it depends. More water resistance means paddling takes more strength, but it also means the paddle is more likely to float well.

It’s often a matter of surface area and displacement of water. Swing weight increases with the size of the paddle. Since a bigger paddle will typically have more weight but also more surface area, the effect on flotation varies.

You can test the swing weight of your paddle by holding it the way you’d normally paddle and swinging it through the air.

Different materials float differently, and it’s not only about their weight. This is the main reason why the price matters.

Aluminum paddles are common in the cheaper end, but aluminum isn’t the most floaty of materials. Although the shaft is a hollow tube, it’ll still sink on its own. The plastic blades on the ends give it some buoyancy, but it may not always be enough. And on a cheap paddle, they may come off.

How well do kayak paddles float with these materials? Generally, all right, but there’s more risk of sinking than there is with high-end paddles. Plus, fatigue can build pretty quickly with aluminum paddles.

While wooden paddles aren’t very common these days, they still exist. These solid wood designs are heavier than modern paddles. And sometimes, they sink.

You may be wondering, do kayak paddles float a whole lot better with a different design? The answer is yes.

However, it doesn’t stop there. Different brands and models have different structures of these fibrous materials. Also, some gain additional buoyancy from flotation foam built into the paddle.

So, these paddles float better. What’s more, that additional buoyancy helps push the blades out of the water, which means it takes less force to swing the paddle into the next stroke. 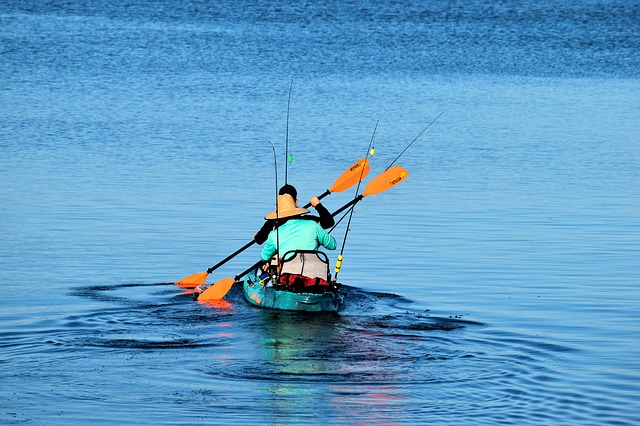 Another element that affects the answer to “do kayak paddles float?” is the shape. And we’re not talking about the shape of the shaft. While it affects the ergonomics and some are better for fishers and fishing kayaks, and others are better for racers, it doesn’t play a role in making the paddle float.

However, the size and shape of the blades do. Certainly, more surface area means better buoyancy.

Basic paddles sometimes have symmetrical blades, much like canoe paddles. While this design may float better, it isn’t optimal for kayaking performance.

Asymmetrical blades with tops that reach further than the bottoms will cut through the water surface better and give you a more even push that makes better use of the whole blade. Since you sink the blade at an angle, you’d get an uneven distribution of resistance with a symmetrical blade.

As a result of slimming and skewing the blades to make everything lighter for maximum performance, some of the high-end paddles lose a bit of buoyancy. They may eventually sink in some cases. But generally, you’ll have plenty of time to retrieve the paddle before that happens. 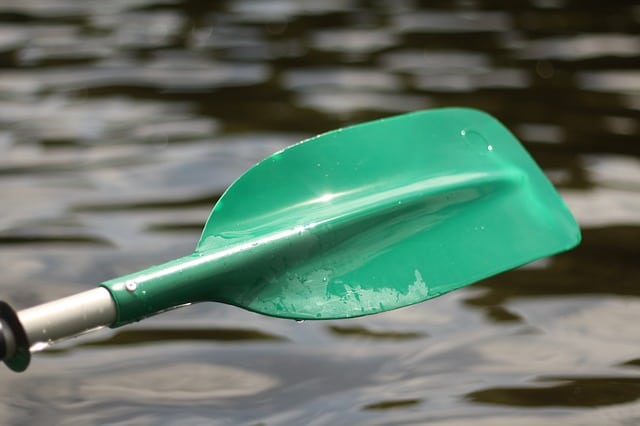 A paddle can have a matched or feathered configuration. A matched paddle has both blades aligned the same way, making the paddle symmetrical. Feathered paddles have the blades rotated differently, which improves the stroke.

The blade will cut out of the water and through the air with more ease, while you also maximize the distribution of resistance in the water for an efficient stroke.

Most paddles let you rotate the blades to match or feather them. However, there are also fixed paddles.

Adjustable paddles often offer a few fixed angles to choose from. However, some let you rotate the blades seamlessly as you please. Do kayak paddles float better with one configuration than the other? Well, yes.

Once again, the surface area makes a difference. The more you feather your blades, the easier the paddles sink.If the blades are parallel, the full surface area of both blades will rest on the surface. If one is more perpendicular to the surface, it may go under a bit.

Are you still struggling with these concepts of kayak paddle design? This video will help you.

What’s the Point of a Paddle Leash?

If you drop your paddle while you’re moving, the kayak paddle stays in the water. It won’t follow you. Depending on the current and other conditions, it may even float away quickly. Even if the current is on your side, paddles don’t flow as fast as kayaks, so it’s unlikely to catch up.

Until you’re drifting away downstream without a paddle, it’s hard to realize just how tricky the situation is. It’s not like you can paddle over to fetch the paddle because that would require you to have it already. It’s quite the catch 22 situation.

If the current isn’t too bad, you can exit the kayak and swim over to your paddle and then back. But what if I told you there’s an easier way that lets you stay dry?

A paddle leash lets you secure the paddle do your kayak. If you find yourself wondering, “do kayak paddles float?” you can instead conclude that it doesn’t matter when you have your paddle on a leash. 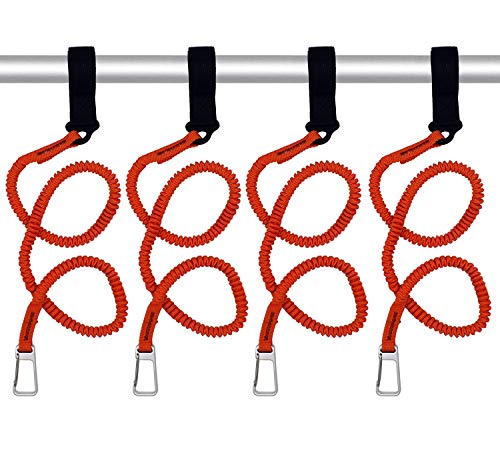 It’s such a simple solution. You can clip or hook a leash to yourself or to the kayak and keep the paddle secure at all times.

How to use a paddle leash

In one end, there’s a clip, carabineer hook, or similar fastening mechanism. You can fasten this to your life vest or clothes or directly to the boat.

If there are no D-rings or other spots to attach it to your kayak, you can hook it under the seat. Another classic trick is to loop a rope around the kayak and tie it, and then attach the leash to that. Some paddle leashes also have additional ropes or strings that you can fasten to.

In the other end of the leash, there’s a loop that will hold your paddle. It’s usually a Velcro strip, a cinch lock, or a strap with a button.

There are no downsides to using a paddle leash. However, you may have some trouble if your leash is too short. It can restrain your movement, so make sure to get a fairly long one. This is extra important if you’re using an inflatable kayak.

If you do this right, you won’t even notice that there’s a leash. But you’ll be happy that it’s there when you drop your paddle and start thinking, “Wait, do kayak paddles float?”

What Do I Do If I Lose My Paddle?

If you drop your paddle, try to catch it as soon as possible. Roll your kayak or get out if it’s necessary and possible. The sooner you reach for it, the more likely you are to retrieve it. 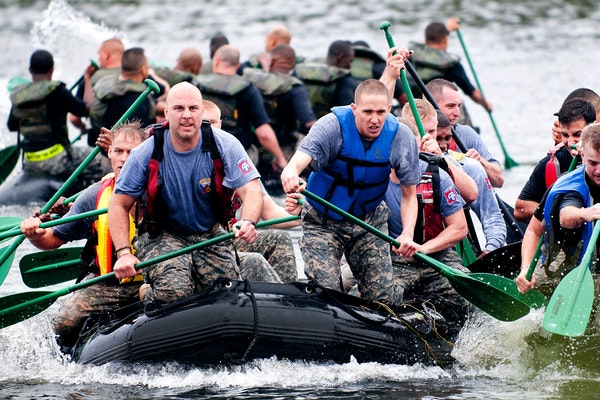 Do kayak paddles float? In general, they do. But remember to look for the qualities you need and get a paddle leash for extra safety.

If you want to double-check that your paddle floats, let it sit in shallow water before using it in your kayak. You’ll see whether it floats. Are you looking for more info on kayaking and outdoors activities? Keep browsing our site for lots of insights. And be sure to leave us your feedback in the comments section below.

Daniel C. Warren gradually morphed from a weekend warrior into a full-time outdoorsman and outdoor blogger. From picking up trash in the woods or sleeping under an open sky to hiking until his plantar fasciitis says no more or having a field day fishing with like minded fellow countrymen, there’s little he doesn’t wholeheartedly enjoy while out in the wild. While some might call him a true-born nature freak, he likes to see himself as a “born-again” outdoor enthusiast. Daniel just can’t get enough of nature, and we’re grateful whenever he decides to share his latest experiences with us. 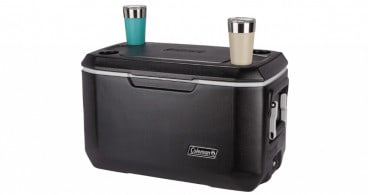 How To Pack A Cooler Like A Snack Pro 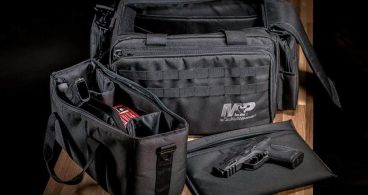 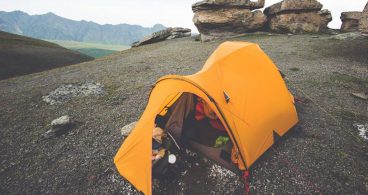 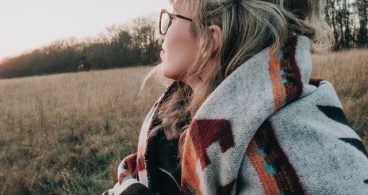