Randall’s Adventure Training was established in 1997 by Jeff Randall and Mike Perrin as an outdoor survival training agency providing global training, gear, and logistical solutions to military and law enforcement agencies as well as civilians in remote environments.

Unlike many knife companies, ESEE does not release a new knife simply because it looks good on paper. Instead, they personally field test each new prototype before it makes it to the production stage.

Then, based upon feedback, they tweak the final design and the knife is placed into production. After that, the finished knife is field tested again stateside and during jungle survival outings in the Peruvian Amazon as well as by numerous users around the world who submit feedback on their experiences with ESEE knives.

However, it would obviously work very well for most anyone in a survival situation. 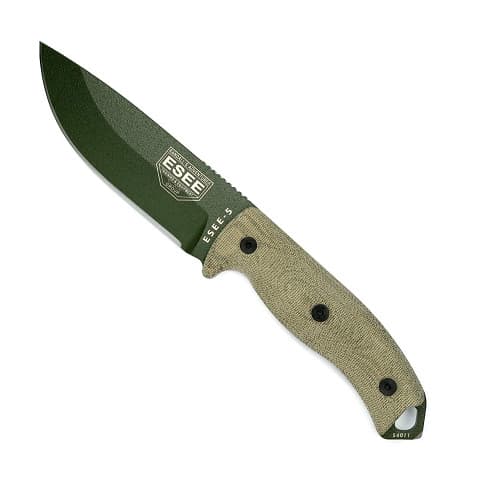 The ESEE-5 survival knife features an 11 inch overall length with a gorgeous drop point blade shape measuring 51/4″ in length and is constructed using 1/4″ 1095 high carbon steel hardened to 55-57 Rockwell with a high, flat ground (their web site says it’s a saber grind but it is incorrect!), bevel, and a textured black or olive drab green powder coat finish.

Also, both colors are available with both serrated and non-serrated edges. In addition, it also features a very ergonomic, full-tang, grip shape with handle slabs made from canvas Micarta (Rucarta) and a built in glass breaker/bow drill pivot on the end and it includes a Kydex sheath w/clip plate. 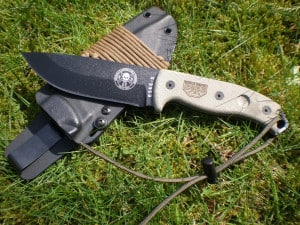 In my opinion, this is one beautiful knife; very functional as well! While I am not entirely certain that a Drop Point is more appropriate than Clip Point for the purpose of outdoor survival, it is a stronger point.

Thus, in that respect, I guess it is better than a Clip Point. Regardless of the merits of either tip shape, the designers of the ESEE-5 must have had a flash of genius when designing this knife because every line is as about a perfect as is humanly possible!

For instance, the drop point blade shape is one of my favorites because it does so many different jobs well and, because the tip of the blade is situated out of the way when skinning game, you can see exactly what you are doing and thus, you have the greatest amount of control over the knife which is very important when you need to preserve the hides intact for later use.

Also, the serrations along the spine of the blade near the handle are very handy and they provide a non-slip surface for your thumb when applying extra pressure to the blade to make difficult cuts.

In addition, the tiny ricasso allows the long, straight, section of the edge to extend almost all of the way back to the single quillion formed by the Micarta grip which allows the user to apply the maximum amount of leverage when carving. Plus, the long, straight section of the edge is just long enough to be an effective slicing tool and it transitions into a beautiful sweep with the perfect angle near the tip for skinning game.

Turning our attention to the handle, it too is very nearly perfect. The choice of canvas Micarta (Rucarta) is both an obvious one and a good one since canvas Micarta provides an excellent gripping surface and it is impervious to heat, cold, abrasion, impact, and most chemicals. Thus, the handle slabs will easily last as long as the knife blade (if properly sharpened) and probably longer.

Also, the shape of the grip is obviously designed with knowledge of the anatomy of the human hand in mind since it incorporates a slight reverse taper with a noticeable downward curve at the end which causes it to very closely follow the dimensions of the user’s hand. In addition, the canvas Micarta slabs are affixed to the full tang in three different places for a secure fit and the tang extends out of the back of the Micarta slabs to form a glass breaker/bow drill pivot point.

Last, while 1095 high carbon steel is both a good choice and a common choice of steel for outdoor knives intended for hard use because it is good compromise between a hard steel and a tough steel, it’s not a stainless steel and thus, it is subject to corrosion.

Consequently, the ESEE-5’s blade is coated with a baked-on powder coat in your choice of black or olive drab green which prevents corrosion on all but the edge of the knife.

Also, the Rockwell hardness of 55-57 is an excellent hardness point for this steel and for survival knives in general because it is hard enough to hold and edge and yet, it is not so hard that it is brittle. So, while I would prefer it if the blade on this knife were made from a stainless steel such as AUS-8, the powder coating does reduce maintenance to a minimum.

I also believe that it is a little bit too short to serve as a sole survival knife (although a shorter knife is easier to carry in a plane) and thus, I would be more inclined to carry it if I were to mate it with a larger and longer knife to handle the light chopping jobs often necessary in a survival situation.

The Esee 5 Fixed Blade Knife is a beautifully crafted knife with a finish you’ll rarely find in this price category. It is a huge leap forward from the previous models, with a much more ergonomic handle and a blade that can hold an edge much longer.

It is a massive survival knife that can work double duty as a defense knife. It also comes with some premium features such as a kydex sheath and six amazing color combos to choose from. It doesn’t shine bright as a bushcraft knife, but it is surely a trustworthy backup survival knife you can entrust your kids or grandkids with. 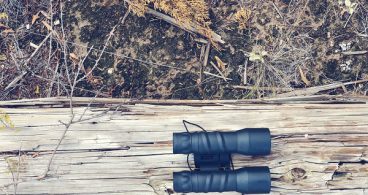 Outdoor Survival: How to Get in (And Out) of the Woods in One Piece 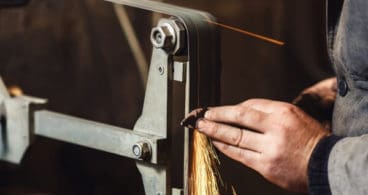 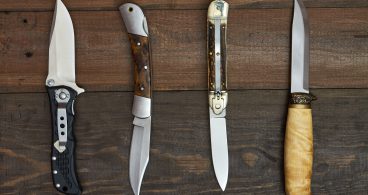