Jim Bowie became famous for his knife-fighting skills largely because of the Sandbar Duel in Mississippi. He won the fight using a type of knife that would later become widely known as a “Bowie knife.” This first Bowie knife was a gift from Jim Bowie’s brother and was made by a blacksmith named James Black.

The shape of Bowie knives is considered quintessentially American, though it was taken from the Spanish folding knives of the time. The most distinctive feature is the clip point which is where the spine of the blade dips down to form the tip.

The scope of the clip point is to make the blade more streamlined and thus better for piercing. The back edge of a clip point may or may not be beveled and sharpened.

There are many materials that may be used to make the blades of Bowie Knives. Stainless steel is often used to make a blade that is resistant to rust and fairly durable. Cheap blades made from other materials can be difficult to sharpen and if sharpened may not hold an edge for very long.

Aside from the blade’s quality, another factor that should be considered when shopping for Bowie knives is the quality of the handle. If the knife is to be used for hunting or other outdoor activities, the ease of gripping it in various conditions is important.

An outdoor knife should be easy to hold in cold or wet weather and when skinning or gutting animals. 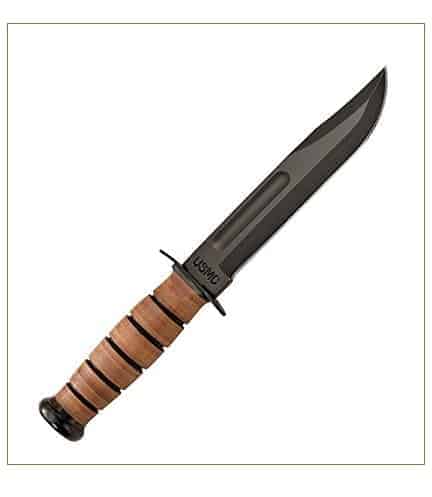 This Bowie knife comes with a seven-inch blade made from 1095 cro-van steel. It was originally made for American soldiers fighting in WWII and comes stamped with a US Marine Corps emblem. It also comes with leather sheath made in Mexico.

This knife also has a distinctive oval-shaped leather handle that is both durable and easy to grip when wet. The tip is narrow and sharp, making it the perfect tool for dressing game.

Users praise the knife’s ability to hold a razor-sharp edge and the ease with which it can be sharpened and re-sharpened in the field. The KA-BAR Marine Fighting Knife has a strong reputation when it comes to being reliable for survival in the wilderness and is often a treasured possession of ex-servicemen.

It is excellent when used for its intended purposes which are as a utility knife and for self-defense/combat. 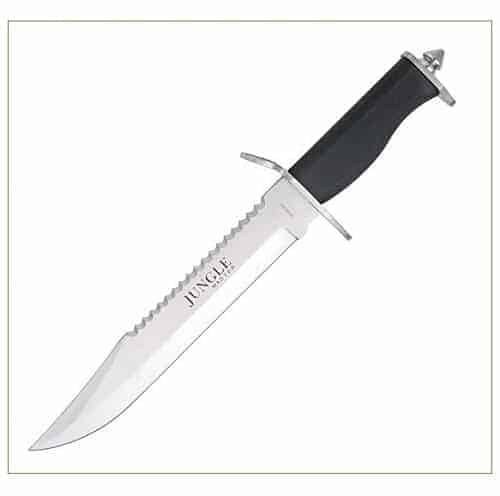 The blade on this knife is made with thick stainless steel and measures 10.5 inches. It has a serrated spine which makes for an effective saw. The handle is made of ridged rubberized metal making it comfortable to hold. The blade and the handle together add up to a formidable 15 inches, making the Jungle Master to be useful for various tasks in the wild.

Users have found it valuable for everything from hunting to use as a machete for cutting wood. Many have found the blade to be durable, holding an edge well and the handle sturdy and comfortable to hold. While knives are practical implements that are meant to be used, many who have purchased this knife find it looks to be particularly impressive. The Jungle Master Hunting Knife could easily be mounted as decorative piece when not being used for hunting and in survival situations. This knife comes with a nylon sheath. 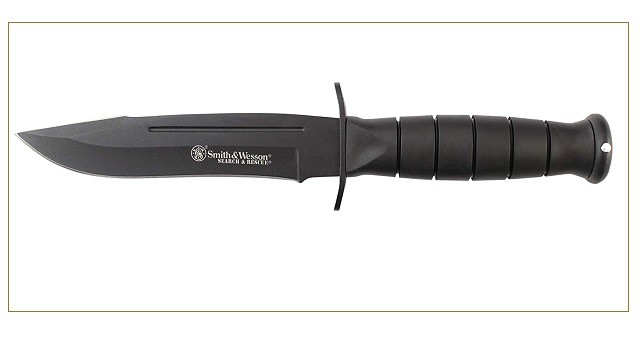 The Smith and Wesson Bullseye Search and Rescue Bowie knife has a blade that measures 5.88 inches long. It is made of 440 stainless steel which is extremely hard. The handle is ridged, lightweight aluminum with a rubber coating that makes it resistant to slipping in wet or slippery conditions.

Those who have purchased this knife have found it to be rugged and able to tolerate hard use. Many users have found that the blade’s relatively small size makes the knife more useful as it is easily maneuvered in tight situations where a longer blade could become a liability.

The blade is sturdy enough to be used for digging and for cutting wood. Included with the The Smith and Wesson Bullseye Fixed Blade Knife is a steel-reinforced nylon sheath and a sharpening stone that can be used to hone the blade to a razor-edge.

Here’s a beautifully crafted Bowie knife that will be a showstopper on your next hunting trip. The Bear & Son Cutlery Stag Bowie Knife’s 8-1/4″ Damascus steel blade mimics Jim Bowie’s legendary blade to a tee. The handle has a finger guard and is made of either genuine India Stag Bone or White Bone (there are two impressive models to choose from). This gem is also made in the U.S.A.

This is a full tang Bowie that will stand up to heavy use for many years to come. It is also very comfortable in hand, is razor sharp out of the box, and the Damascus steel blade is a work of art per se. You can primarily use this knife to field dress your game or keep it as a backup survival knife when out in the sticks.

When hunting or camping in the wilderness, the quality of a knife is essential to an individual’s survival. A knife should be carefully chosen and carefully maintained as well.

Bowie knives are very versatile tools. Originally used as a combat/ self-defense weapon, a quality Bowie knife can make a reliable survival knife as you can baton wood with a properly sized knife and double as a skinning knife over your next hunting expedition. 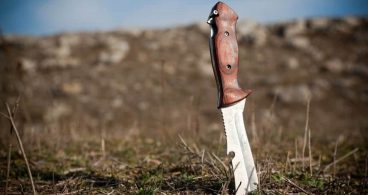 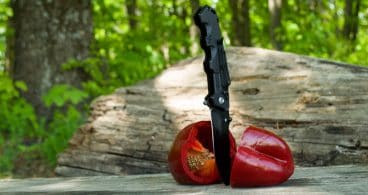